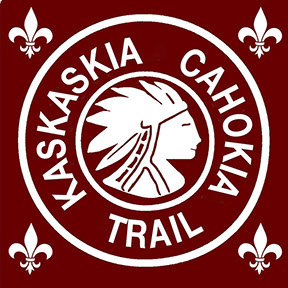 The King’s Road in the Illinois Country was used and maintained by Canadians to connect the francophone communities of Kaskaskia and Cahokia (KC), named after two friendly Native American Nations.

The course followed an ancestral indigenous trail that was most likely, at its origins, a track of the animal kingdom. As early as 1725, the frequent use of the road necessitated its widening to accommodate the wooden carts that became typical of the Midwest. The King’s Road (in reference to the king of France) should not be confused with El Camino Real (meaning The Royal Pathway) named after the king of Spain) in Southern Texas.

The King’s Road, better known today as the KC Road, is the birthplace of the current State of Illinois and also its first road. It is located south of Chicago, near St. Louis, Missouri, two major francophile metropolitan centers in America. In 2014, it was proclaimed a historic corridor by the government of Illinois. The counties of Monroe, Randolph and St. Clair and their respective municipalities are working together to showcase the French – Native American legacy of the 60-mile (97-kilometer) KC Road and promote it around the world.