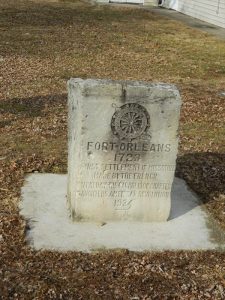 Fort Orleans, named in honor of the Duke of Orléans, was the first settlement on the banks of the Missouri River and in what is today the State of Missouri.

The fort was erected in 1723 at the mouth of the Grand River, near present-day Brunswick, by Étienne Véniart de Bourgmont, born in Normandy, France, and former commandant of Fort Ponchartrain of Detroit. A village of the Native American Missouri Nation was across the river from the fort. The establishment of Fort Orleans included a chapel that was the first Catholic church in the Missouri Valley. The first resident priest was Father Jean-Paul Mercier, who studied at the Petit Séminaire of Quebec. He died in Cahokia in the Illinois Country on Friday, March 30, 1753 after 35 years of service in foreign missions in Colonial French Louisiana.

In his 1714 paper entitled The Road to Be Taken to Ascend the Missouri River (the first navigation report regarding America’s longest river), Véniart describes the lands of the Native American Ecanz as follows: “These are the most beautiful countries and the most beautiful pieces of land in the world. The prairies there are like seas and full of wild beasts, especially bisons, cows, hinds (doe) and stags, which are there in numbers that stagger the imagination. They (the Ecanz) almost always hunt with bow and arrow. They have very fine horses and are very good horsemen.”

Famous French cartographer Guillaume Delisle’s 1718 map of Colonial Louisiana and the course of the Mississippi was the first to portray the Missouri River with accuracy. It influenced the cartography of the Missouri Valley throughout the 18th century. Needless to say that Véniart’s 1714 geographical descriptions greatly helped. It is noteworthy that Delisle taught geography to the young Louis XV and received from him in 1718 the title “King’s first geographer”, created on this occasion. 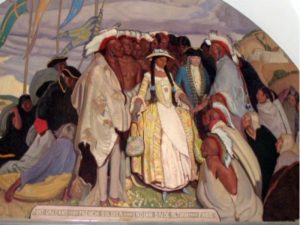 This artwork by Ernest Leonard Blumenschien, displayed on the second floor of the Missouri State Capitol in Jefferson City, represents the return to Fort Orleans from a trip to Paris, France, organized by Véniart de Bourgmont in 1725 for a small group of soldiers from the Marine troops accompanied by some Missouris. The scene depicts the elegant Parisian dress worn by the native wife of young Sergeant Dubois,standing on her left, in azure military attire. The newly married couple is surrounded by their aboriginal travel companions with white and red plumage.

This rich French fact of early American history is almost unknown to Americans and to the world of the Francophonie.