In February 1685, Robert Cavelier de La Salle founded Texas’ first French settlement of the “Lone Star” State, which was commemorated under the name Fort St. Louis, with some 180 settlers. His initial dream was to build a trading post at the mouth of the Mississippi River.

But navigational errors caused his fleet of tall ships, namely La Belle, Le Joly and L’Amiable, to travel further west into Matagorda Bay, where it took refuge before moving to a more favorable location on the shores of Garcitas Creek. La Salle’s choice of landing was an escarpment near the current community of Inez / Victoria.

All of the colonial buildings were built of wooden beams sunk vertically into the ground. The spaces between the “earthen posts” were filled with a mixture of clay, grass and reeds. A thatched roof covered every dwelling. No palisades were erected for added protection of the settlers. The chapel was at the center of the colony. It was the first Christian ecclesiastical house on the coast of the Gulf of Mexico, and the first in the actual State of Texas that was not located along the Rio Grande. It is said that the first known marriage involving a white person in Texas was celebrated in this makeshift chapel. Further indications are that “baby Barbier” was the first white child born in Texas. Living conditions were cruelly miserable. The colony did not overcome its curses. La Salle was assassinated in March 1687 in Navasota, north of present-day Houston. Around 1690, the survivors were amicably took in by the local Native American Caddo Nation. 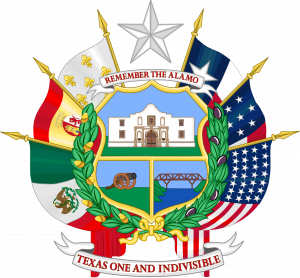 The golden fleur-de-lys on a white background flag of France’s royalty floated on Texas from 1684 to 1690. This historic French fact of a six year duration is proudly reflected on the upper left of Texas’ coat of arms beside the “Lone Star”. Did you know that “Texas” comes from the aboriginal word “tejas” which means “friends” in the Caddo language.

La Belle was the principal vessel of La Salle’s 1684 Expedition in the Gulf of Mexico (a fourth vessel, named Le Saint-François, never made it to Matagorda Bay). The fleet’s main tall ship sank in 1686 in Matagorda Bay. Artifacts recovered from the wreck of La Belle do provide a fascinating window on Colonial French Louisiana – among the artifacts were tools, personal belongings, dishes, weapons, and many different items intended for trade with Native Americans. More than a million objects from La Belle have been preserved representing a rich cultural heritage that can be admired at the Bullock Museum in Austin, Texas. Here are some images of these objects from centuries gone by.