Kansas City, Missouri, is located on the Missouri River at its confluence with the Kansas River, one of its tributaries coming in from the neighboring state of Kansas in the west. François Chouteau, grandson of Pierre Laclède, the founder of St.Louis, is considered the founder of Kansas City.

In 1821, François and his wife Bérénice created the first trading post and commercial establishment in the city, near the southern end of the actual Chouteau bridge, downstream of the Missouri River. Due to river floods the post was moved westward and upstream to higher grounds towards the mouth of the Kansas River. The small community of traders and farmers established at this river junction was entirely French speaking. The place was named “Chez les Cansès”. To understand the rationale of this chosen location, we must go back to the origin of this strategic intersection of navigable rivers during the French administration of colonial Louisiana. 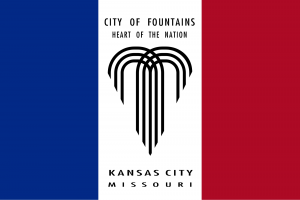 In 1714, Etienne Véniart de Bourgmont ascended the Missouri River and recorded the waterway’s first official description. In 1718, Guillaume Delisle used this account to design the first map of the area, where he mentioned the “Great River Cansez” in Kaw Nation, allied with the French. In 1744, the French built Fort Cavagnial on the right bank of Missouri, north of the Kansas River confluence, where a Kaw village was located nearby. For twenty years this fort controlled the fur trade with the Kaw Nation (the members of which were known as Cansez or Kansas) and other Upper Missouri tribes. The meeting of the two rivers was a strategic crossroads for the fur trade. In 1764, however, the fort was abandoned after France ceded to Spain the western half of Colonial Louisiana; that is, the territory from the Mississippi River to the Rocky Mountain range.

Until around 1840, the first permanent colony of Kansas City, called at first “Chez les Cansès” (Kaw village) then Chouteauville, remained entirely francophone. Unfortunately, the Great Missouri Flood of 1844 drove the farmers out of what was called the “French Bottoms” (currently known as the “West Bottoms”, for West of downtown Kansas City), which is the historic heart of the city. It is said that the singing of birds and chirping of squirrels have replaced the old French songs that animated this neighborhood on the shores of the Missouri River.