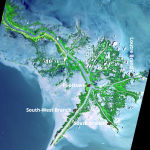 Pilottown is a small community of short-term inhabitants located at the mouth of the Mississippi, on the east bank of the river, just upstream from the junction (referred to as the Head of Passes) of the three main branches of the delta, namely, the South-West, South and Loutre branches.

The Head of Passes provides pilot assistance to ships traveling up or down the river to/from New Orleans for a distance of about 99 miles (160 kilometers). The know-how of these pilots is indeed essential to guide the ships on this perilous course which requires a deep knowledge of meteorology, currents, tides and sandbanks as well as other hazards. Founded in the late 19th century, Pilottown was a port village, exposed to the disastrous consequences of hurricanes that regularly hit southern Louisiana State. In August 2005 hurricane Katrina drove out the last permanent residents. In reality, however, the piloting of ships existed since the beginning of Colonial French Louisiana. It was then located on the Loutre (east) Branch of the riverpass at “Port de La Balise” along the “Chenal pour les vaisseaux” (the Vessels’ Channel). Its story is as follows…

When New Orleans was founded in 1718, the French already had a rudimentary port to protect the entrance to the Mississippi Delta, named “La Balise”. In 1723, a channel was dug to facilitate the passage of deep-sea vessels and the port was fortified. At La Balise, ships were able to hire a pilot to guide them to New Orleans. In cases where the ship’s draught was excessive, its cargo was unloaded on smaller boats for the pursuit of their transportation. Over the years, the village of La Balise became the main port of New Orleans. Its geographical location, that is being closer to the Gulf of Mexico, facilitated trade with the Spanish colonies. However, this advantageous situation was a fragile one because the delta was constantly reshaping itself and hurricanes were often devastating.

In September 1740, a strong hurricane hit the region and largely destroyed the La Balise. By the end of the 1740s, successive storms had finally eliminated the last traces of the original settlement. The village was rebuilt several times, with storeys that were equally arduous and difficult every time. The last story did force the abandonment of the village in the 1860s, to be reborn up river at the Head of Passes under the name of Pilottown.