In the Native Americans’ recorded history, we find that Alexis Lefebvre, born in Quebec of a French father (Gabriel-Nicolas Lefebvre), was a woodsman (coureur des bois) in the Great West of 1722. At that point in time, indigenous people in Montana were acquiring their first hunting rifles, 21 years before the La Vérendrye brothers (from Trois-Rivières, Québec) discovered the Rocky Mountains.

 Alexis said to his brother Antoine “Because I’ve spent more than seven years in the area, I swear to you that the La Vérendrye brothers will turn back when they see the Rockies receding as they advance toward the mountain range into the infinite undulating plains” (translated from French).

Along the Rocky Mountains, from Alberta to Colorado, Quebeckers have named many Native American tribes, notably the people of the Crow, the people of the Blood, the people of the Snake (Shoshone), the Blackfoot people and the Flathead people. A great number of these tribes have retained until today their original French name, for instance, the Pends d’Oreille, the Nez Percés, the Gros Ventres and the Cœur d’Alène tribe. While the Roche Jaune River took the name of Yellowstone, the Cache la Poudre River in Colorado continues to be called by its name of origin.

Most of the actual territory of Montana, nicknamed the Big Sky State, was included in the Louisiana Purchase Treaty that was mutually agreed between France and the United States of America and signed in Paris on Saturday April 30, 1803. It more than doubled the size of the USA. Quebec, noted for its scenic beauty, is situated along Interstate 90 southeast of Big Timber in Sweet Grass County on the shores of the Yellowstone River. Although the old village no longer exists today, its name has been kept, as a lovely tribute to history.

The Cache la Poudre River, north of Denver, Colorado, is part of the national heritage of the United States. This historical stream was so named because the French speaking woodsmen customarily hid gunpowder along the riverbanks. Its watercourse flows into the south branch of the Platte River which was, in turn, named by the Mallet brothers, Pierre-Antoine and Paul (born in Montreal), who were en route to Santa Fe in 1739. The explosive powder was kept in a buffalo horn.

The Pends d’Oreille exhibited colorful shells. The Nez Percés wore decorative bones. The Cœurs d’Alène showed a toughness in business. The Blackfoot people distinguished themselves by their olive-black colored moccasins. And, the people of the Blood painted their face with a blood red color.

 Montana’s French heritage lies in the nomenclature of its early American history supporting exploration and the fur trade industry as well as the maintenance of friendly relations with Native Americans, all in keeping with the long-standing policies of Samuel de Champlain, founder of Québec City (nicknamed America’s accent). 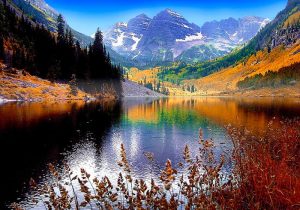