Columbia is a city in Monroe County, Illinois, that played a significant part in the history of French America for several decades on a daily basis. Unfortunately, no historical monuments, cairns or plaques are reminiscent of these years gone by of Colonial French Louisiana.

Only a few anecdotes in local chronicles reveal a most fascinating past and a rich French heritage. It is through the promotion of the Kaskaskia – Cahokia Trail (also referred to as Chemin du roi / King’s Highway), Illinois’ first road, that the Columbia Eagle has emerged from nothingness. Indications are that the first settlers, who were francophone, arrived at the end of the 17th century to cultivate the rich arable land of the American Bottom which is the vast flood plain of the Mississippi River between its rocky escarpments. 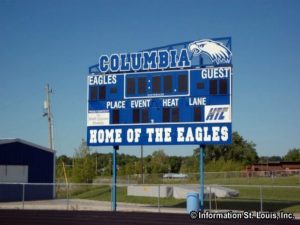 As most colonists came from a place in Normandy, France, called “L’Aigle” (The Eagle in English), their new settlement in America was so named at the sight of a bald eagle. It is of no coincidence that Columbia’s home sport teams bear the name “The Eagles”.

When the colonies along the historic King’s Highway fell under the British crown in 1763, most, if not all, French speaking inhabitants left the region to resettle on the western shores of the Mississippi, a part of Colonial Louisiana which was then administered by Spain (since 1762) in full respect of catholicism and French customs. 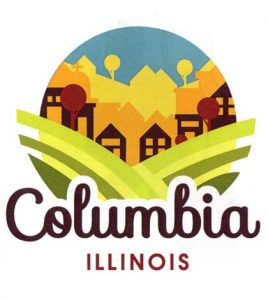 If Columbia is now home of The Eagles, it was in its beginnings a staging post on the Kaskaskia – Cahokia Trail. According to the actual city logo, Main Street can be seen as a window on the past, that is, on what was a serviceable stop on the Chemin du Roi / the King’s Highway during Monroe County’s early years of colonization.

With a view to facilitating travel between Kaskaskia and Cahokia, public transport was structured into a series of staging posts established where there was a settlement. Voyageurs could eat, rest, get new supplies, or spend the night as needed. Each post was held by a postmaster who provided carriages and horses, if necessary, to ensure safe transportation to the next post. It is said the carriages were rudimentary wooden vehicles with two or four wheels, uncovered. This way of traveling lasted until the generalization of rail transport at the end of the 19th century.