Four hundred years ago, the drainage basin of the rivers Angelina, Wichita, Red (of the South), Sabine and Neches running through north-east Texas, north-west Louisiana, south-west Arkansas and south-east Oklahoma were the territory occupied the Caddo people.

This indigenous nation, composed mainly of farmers, warriors and potters, were known to French missionaries, notably Father Valentin, and traders from Natchitoches, like François Grappé dit Touline. In Wood County, Texas, there is archaeological evidence suggesting that a French trading post was located along Mill Race Creek in the early 1700s near present-day Hainesville. Moreover, it is said that Louis Juchereau de Saint-Denis, a French Canadian from Beauport (Quebec City), allegedly erected the not well known Fort Le Dout near Black Oak to solidify France’s interests in the region.

Some longtime residents of Wood County have recently affirmed to the local gazette that according to their ancestors there was a French fort within the county’s boundaries. The journalist concluded her column by reporting that even if the relations between the Native Americans, the French and the Spanish remain a mystery, the presence of Fort Le Dout at the western frontiers of Colonial French Louisiana is a certainty. 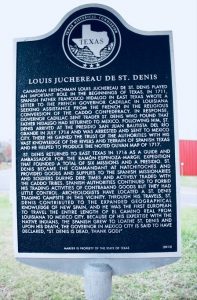 A commemorative plaque at the intersection of State Highway 21 and Route 225 in the hamlet of Douglass reminds visitors that Saint-Denis played an important role in Texas’ early American history. He helped found six missions in East Texas. In addition, he is considered the first white man to travel El Camino Real (the Royal Road), an ancient Caddo trail crossing Colonial Louisiana toward Mexico City. The map of Texas drawn up by Guillaume Delisle in 1718 clearly shows the Caddo trail traveled by Saint-Denis in 1713 and 1716 from the Red River to the Rio Grande.

Since the Spanish authority had banned the firearms trade with the Native Americans and because the Caddo people, allies of the French, were asking for hunting rifles, it is not surprising that Saint-Denis then erected a fortified trading post, named Fort Le Dout, in Wood County. This astonishing story alone explains the public statement made by the then governor of Mexico City, “Saint-Denis is dead. Thank God “.