On the King’s Highway, about 3.7 miles (6 kilometers) west of Prairie du Rocher, is the last of three successive forts built by the French during their colonial occupation of the Illinois Country in the 18th century and bearing all the appellation “de Chartres”.

The first two forts were erected in the 1720s. They were both square structures fortified by wooden palisades and with a bastion at each of the four corners. The third fort, built in the 1750s, was a massive stone structure surrounding six major buildings. It is said that the powder magazine is the oldest building in today’s State of Illinois. The three forts take their name from Louis, Duke of Chartres, son of the Regent Philippe d’Orléans.

These impressive fortifications served as the seat of government for Upper Louisiana as well as the headquarters for the military operations in what is now the American Midwest. The fort’s canons imported from France have always been silent. They never fired a shot. Following the 1763 Treaty of Paris putting an end to the Seven Years’ War between Britain and French (1756 – 1763), British troops occupied the fort from 1765 until 1772, when the land encroachment by the Mississippi River caused the collapse of the south wall. Progressively, the French speaking inhabitants left the site to resettle on the western shores of the mighty river. 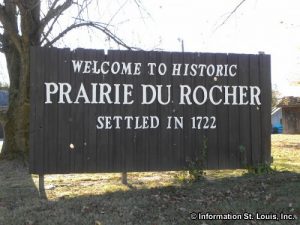 Two years after the construction of Fort de Chartres, the village of Prairie du Rocher was established on nearby grounds donated by the Compagnie des Indes. The villagers worked in the adjoining meadows in support of the fort. Prairie du Rocher takes its name from the rocky promontory beside which the flatland community is situated.

Prairie du Rocher is known throughout the Midwest for having kept the French-Canadian tradition called “La Guiannée” (or La Guignolée) since its arrival in the region in 1722. Thanks to this old song and related customs, special for the occasion, residents continue to highly appreciate their rich French heritage. On New Year’s Eve, dressed in bizarre and somewhat ancient costumes, the revelers wander from place to place singing La Guiannée, a beggars song for favors. Its origins are from the countryside of the province of Quebec. Moreover, the sharing party created by it is a lot of fun.