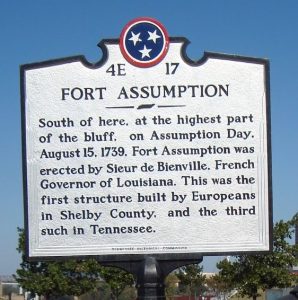 The site of Fort Assumption was in what is today downtown Memphis, midway between New Orleans, Louisiana State, and Kaskaskia, Illinois State. It played an important role in the management of the Mississippi River which was the backbone of Colonial French Louisiana.

In 1739, Jean-Baptiste Le Moyne of Bienville, during his fourth term as governor of Louisiana, decided to build a new fort at the confluence of Margot River (now Wolf River) and the Mississippi to strengthen the defence of the central course of this strategic waterway. The fort was completed and inaugurated on August 15, 1739, on Assumption Day. It was built in the vicinity of an old French fort made of logs, Fort Prud’homme, which was erected by explorer Robert Cavelier de La Salle in 1682.

Fort Assumption stood on the heights of the fourth promontory of Chickasaw Bluff dominating the Mississippi. It consisted of three bastions, two facing the Mississippi River and the third facing inland. At the height of its activity in 1740, 1200 men of the Marine Troops were in garrison. A large number of Native Americans settled near the palisades. Sixteen years after the 1803 purchase of Louisiana by the United States the city of Memphis, Tennessee, was founded on land previously stamped by French occupants.

It is a virtually unknown French fact in the history of Tennessee that the four promontories in Chickasaw Country along the Mississippi River were numbered and regularly occupied in the 17th century by Francophones from Canada. These elevated lands, sheltered from the floods, served as campsites for early explorers, relays for travelers between the upper and lower parts of the Mississippi, and boat repair convenient spot. Moreover, rendez-vous were arranged by numbers from one to four.

The “First Promontory” became the site of Fort Pillow in 1864 (Lauderdale County). Randolph, where Fort Prudhomme was erected in 1682, is located on the “Second Promontory”. The “Third Promontory” is within the current boundaries of Meeman-Shelby Forest Park. The downtown area of Memphis, where Fort Assumption was built in 1739, is on the “Fourth Promontory”.