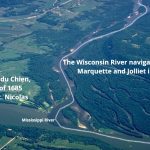 The approach of the summer was particularly warm when Father Jacques Marquette (born in Laon, France) and Louis Jolliet (born in Québec City, Canada) arrived in the Wisconsin River’s estuary. There, they saw before them the majestic Mississippi River, the great waterway they had come to explore. Their bark canoes slipped safely into the stream of the mighty river “with a joy that I cannot express” wrote Marquette. It was in mid-June 1673 near Prairie du Chien, uninhabited at the time.

In 1685, Nicolas Perrot (from Darcy in Burgundy, France) erected a seasonal fur trade post that he named Fort St. Nicolas at the southern end of the nine-mile (14.5-kilometer) long prairie, then nameless, situated just above the confluence of the two rivers. The trade flourished attracting voyageurs, whom the Native American people called “Men of the North” (the Nordics). 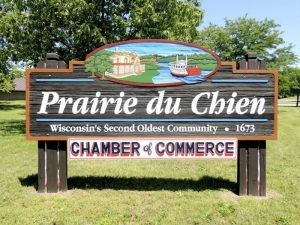 Indications are the fort was renovated in 1754 by Paul Marin de La Malgue, a Montrealer who was the commandant of Fort de La Baye Verte, now the City of Green Bay, Wisconsin. The first settlers arrived during this period, among them, Jean-Marie Cardinal and his wife Élizabeth Pelletier, known as Antaya, and before them the Deschiens family, originally from Normandy, France. Prairie du Chien, Wisconsin’s second oldest community, was born from the dynamism of the fur trade industry and bartering relations with indigenous tribes in the Illinois Country. 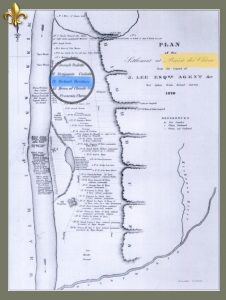 The origins of the name Prairie du Chien, whose pronunciation in English is “prairie doo sheen”, remains a mystery. According to some anglophone historians, the prairie, after which the city was called, bears the name of an ancient tribal chief, named “Chien” (Dog) of the Native American Fox tribe, who used the prairie as a hunting ground.

But there is another equally valid version. According to Michel Brisebois, the official owner of lot 12 (in blue), the prairie was known among the region’s first settlers as DesChiens’ prairie. The place simply took the name of an old family who settled in the prairie after the end of the last hostilities with the Foxes around 1740. Prairie des Chiens or “prairie dee sheen” has retained its original appellation until the 1820s, as evidenced by the 1820 settlement division plan, in English, of the mostly francophone colony (above).

What is even more interesting and fascinating is the fact that the colony has retained its French name through the British regime and the American sovereignty periods. An amazing anecdote from early American history worth remembering.