A few miles south of the city of Gillett, Arkansas, at a place called Red Bluff (formerly Écores Rouges), is the Arkansas Post National Memorial in a large state park which includes a museum. It was there that the last Arkansas’ fortification was destroyed in 1863 in a battle lost by the Confederates during the Civil War.

During the period of Confederate control the heights of the bluff was the site a southern town, protected by a massive defensive earthwork designed to prevent Union forces from going upriver to Little Rock. Today, only few visible traces of the fortification remain. The park also highlights the rich colonial past of the four Arkansas posts that succeeded each other in the area under the French and Spanish regimes. New archaeological digs, east of the park, now aim to better locate the very first Arkansas Post, a French trading post built in 1686, as well as Quapaw villages nearby. For the French, their strong alliance with the local Native Quapaw people had proved vital. To understand this, we must go back to the last quarter of the 17th century, at the mouth of the Arkansas River.

In the Quapaw Country

During their initial exploration of the Mississippi, Louis Jolliet and Jacques Marquette arrived in the Quapaw Country in the summer of 1673. At the first encounter, they were invited to the Quapaw village of Kappa to smoke the peace pipe. Their hosts certainly did not want to give their rival tribes further South the chance to form a rooted bond with the French. This special mark of mutual trust opened the way for a solid commercial, political and military alliance that lasted throughout the Colonial French Louisiana period. Did you know it was also in Kappa in March 1682 that Robert Cavelier de La Salle solemnly first (prior to Venice) took possession of Louisiana in the name of the King of France. He then conceded to his faithful lieutenant, Henri de Tonti, a piece of land located near another Quapaw village, called Osotouy, for establishing a trading post.

Thus was born in 1686 in the vicinity of Osotouy the “Poste des Arkansas”, the first French establishment west of the Mississippi. This was done in agreement and with the full support of the Quapaws who the French called “Arkansas”, an indigenous word meaning “People of the southern wind”. At the outset, the Arkansas Post consisted of a single wooden house and fence occupied by six men. The place grew to play an important role in commerce and Native American diplomacy. Fortified in 1731, the Post protected a small French settlement of hunters, merchants and farmers. It was attacked by the Chickasaw tribe in 1749 and had to be relocated upstream. The remains of the first three Arkansas posts of the colonial period, including two located in the Écores Rouges (Red Bluff), have now disappeared under the waters of the Arkansas River, but the history withstood, as it should. 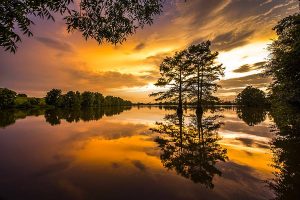