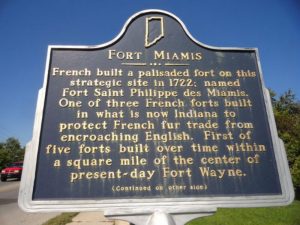 The city of Fort Wayne, Indiana, is located at the confluence of two rivers, namely the St. Joseph and the St. Mary’s, which unite to form the Maumee River. This waterway then flows north-east into Lake Erie near the town of Toledo, Ohio.

During the 18th and the beginning of the 19th century, the region was a war zone at first between the French and the British, and subsequently between Americans and indigenous tribes. Indeed, no less than five forts followed one another to defend this strategic site. So why was it so crucial to protect, at all costs, this location where the Miami Native American people had established their principal village named Kekionga?

By the end of the 17th century, the French had already explored the territory of northern Indiana and discovered the worthwhile advantage of this prime location. Indeed, a short portage of a few miles only (off dry season) between the St. Mary’s River and the Little River permitted to quickly join the Wabash River, a tributary of the Ohio River. As a result of this discovery, the French acquired the expediency of connecting Canada to the Mississippi Valley more directly without virtually leaving the waterways. 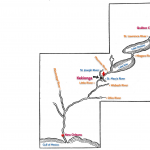 In 1722, the French completed construction of Fort Miami on the shores of the St. Mary’s River for the purpose of controlling this vital link between Canada and Colonial Louisiana and diminishing British influence in the region. The first fort served as a fortified trading post strategically positioned to enhance the already flourishing fur trade with friendly Miamis and other Native American allies. In 1747, it was destroyed by belligerent Miamis and then rebuilt in 1752 closer to the nearby village of Kekionga.

Much later in time, three American forts were successively erected on the site of Kekionga in 1794, 1800 and 1816, respectively. They all bare the name “Fort Wayne” in honor of the American General Anthony Wayne. In 1819, when the last American fort was taken out of service, a small community still resided in the immediate vicinity, mostly of French and Métis origins.

Kekionga, also called Pacanne Village, was the grand village of the proud Miami Nation. Its location was of strategic importance simply because at the cut short portage, it commanded the shortest route between Quebec City and New Orleans.