It is a secret of history that the settling of Colonial French Louisiana began on Dauphin Island in the present-day Alabama State on Saturday, January 31, 1699.

In 1697, Jérôme Phélypeaux de Maurepas, Count of Pontchartrain and State Secretary of the Marine and the Colonies for the kingdom of France, asked Pierre Le Moyne d’Iberville, a Canadian from Ville-Marie (Montreal), to colonize the mouth of the Mississippi River. At the beginning of October 1698, Iberville and his crew left the port of La Rochelle, France, on five vessels including the formidable frigates La Badine and Le Marin. Four months later the fleet arrived in the Gulf of Mexico. After finding the waters of Mobile Bay too shallow to navigate and its shifting sandbanks too unpredictable and risky, Iberville decided to dock and debark on Dauphin Island, at the entrance to Mobile Bay.

While exploring Dauphin Island, Iberville’s men discovered about sixty human skeletons in the southwestern part of the isle. The first settlers of Colonial French Louisiana spontaneously named the place “Massacre Island”. It was revealed later that this horrible site was a burial mound of Native Americans that a hurricane had exposed the previous year. In any event, the French did not stay on Dauphin Island for very long. Around February 8, 1699, they resumed their navigation westwards to get closer to the mouth of the Mississippi River. However, three years later they returned to Mobile Bay to erect Fort Louis of Louisiana in Le Moyne near what is today the City of Mobile, nicknamed the Home of Mardi Gras. The Alabamian municipality of Le Moyne was named in honor of the Le Moyne brothers, Pierre Le Moyne d’Iberville and Jean-Baptiste Le Moyne, Sieur de Bienville, repeated governor of Colonial Louisiana, appointed four separate times during 1701–1743. 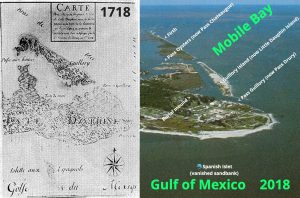 At the time when Mobile was the first capital of Colonial French Louisiana (1702 – 1719), Dauphin Island, called Dauphine on the map drawn up in 1718 by Sieur Broutin (above), engineer of the King of France, served as the colony’s seaport. Small flat-bottomed boats were shuttling people and goods between the island and Mobile. Nowadays, Dauphin Island (about 1 200 islanders) has an undeniable pride of belonging to the old Colonial French Louisiana. Indeed, the coat of arms of the town of Dauphin Island bears three golden fleurs-de-lys. In addition, many of the island’s streets do carry a French name, such as Beauregard, Bienville, Cadillac, Chaumont, Chenault, Epinet, Iberville, Louisianne, Lafayette, Laffite, La Mothe, La Vigne, Orleans, Ponchartrain and Quebec. The adjoining isle is called Petit Pois Island. 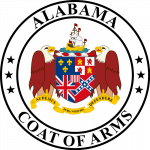 Moreover, Alabama’s coat of arms displays the frigate La Badine as well as the royal blue flag of the kingdom of France. Alabamians do remember their early American history with gratification.