Dubuque is the oldest city in Iowa. It is located 50 miles (80 km) south of Prairie du Chien where Father Marquette entered the Mississippi River on Saturday June 17, 1673, after descending the Wisconsin River. It is said that the next day he visited a Native American village on the shores of the Mississippi where an old man named Hiawatha (also a actual city of Iowa) greeted him warmly.

In 1690, at the request of the Fox Nation, fur trader Nicolas Perrot erected a seasonal outpost on the site of today’s Gramercy Park in East Dubuque, Illinois. Moreover, he visited the Catfish Creek lead mine near Dubuque and taught the indigenous locals how to detach the lead and melt it. However, in 1788 with the arrival of Julien Dubuque the exploitation of the lead mines in the area took off with a momentum. In the process, Dubuque left his name to Iowa’s first community. He was originally from Saint-Pierre-les-Becquets, Québec.

Dubuque befriended the Fox people (also called the Meskawki) who gave him the brotherhood name “La Petite Nuit” and permission to exploit the lead mines on the west side of the Mississippi in Spanish territory. In honor of his friendship Dubuque signed the formal agreement under his newly given name. And, to please the Spanish administration he named his company “Mines of Spain” which he successfully exploited until his death in 1810. Today, in memory of this fascinating French heritage the seal of Dubuque City (below) proudly bears the Native American name of its founder. 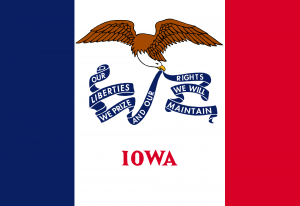 Iowa adopted its official state flag, the tricolor blue, white and red, in 1921 to proudly reflect the period when its territory was an integral part of Colonial French Louisiana which was under Spanish administration from 1762 to 1802. 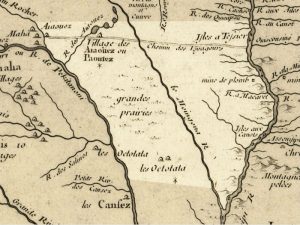 The 1718 map of Colonial Louisiana by Guillaume Delisle (on the right) shows in paler color the territory of present-day Iowa State. We can clearly see the lead mine (mine the plomb) in Dubuque (center right) discovered by Nicolas Perrot in 1690 as well as the mouth of the Ouisconsin River (Wisconsin) further north near Prairie du Chien where the formal agreement between Dubuque (La Petite Nuit) and the Fox Nation was registered. Des Moines, Iowa’s capital whose origins go back to 1843, would be in the center of the map, in the emptiness “grande prairies” (great plains).

The “Chemin des Voyageurs” (Travelers’ Road) in the upper center of the map (straight double line) was a Native American trail used by the French to reach the Omaha and Iowa villages along the Rock River (Big Sioux today) near the actual city of Le Mars, as well as the Otoe, Pawnee and Cansez (also called Kansas) along Missouri. This terrestrial path was the most direct and quickest route between the Mississippi and Missouri rivers.