The city of Vincennes (Indiana) is located in the lower valley of the Wabash River, north of the confluence with the Ohio River. The city owes its name to a young French speaking officer, named François-Marie Bissot de Vincennes (Sieur Vincennes), who erected on this site, in 1732, a palisade trading post of which he was the first commander.

This fortified post was the last of three French settlements built on the territory of Indiana, after Fort Ouiatenon in 1717 (now West Lafayette) and Fort Miamis in 1722 (now Fort Wayne). Why was Fort Vincennes of critical importance? The British were increasingly becoming a serious threat in the Ohio and Wabash valleys. Consequently, it became necessary to protect the lucrative fur trade with the Miami tribes in the region, which was a vital corridor linking Canada and Louisiana. 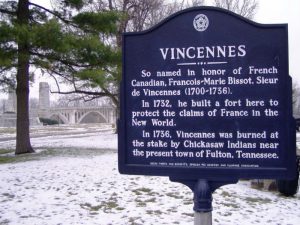 Sieur Vincennes knew the Miami people very well and his great ability to deal with them was widely recognized. They were dependable allies. That is why he decided to set up his trading post in the vicinity of, not one, but four Miami villages. Unfortunately, he did not benefit long of his Native American alliances since he was killed in 1736 by members of the Chickasaw Nation, who were cooperating with the British. Nonetheless, the colony of Sieur de Vincennes survived the Seven Years’ War between imperial rivals Britain and France as well as the American War of Independence. Today, it is the oldest continually-inhabited settlement in Indiana, and the only one of the French period. Was it just a combination of circumstances? Probably not …

In fact, the French origin of Vincennes is not precisely known. It is likely that a trading post already existed on this location in 1683 and that French settlers were still present on the site in 1727. But above all, it was at Vincennes that began the famous buffalo trace, created by millions of migrating bisons that were numerous in the region at that time (see capsule). The trackway was well known to the French, whose control provided them with considerable business opportunities all the way south to the Falls of the Ohio running through the Ohio River, then called “La Belle Rivière”.

The significance of the American Bison in the history of Indiana is such that the image of this majestic animal has been incorporated into the official seal of the State since its entry into the United States of America in 1816. In the bicentennial year of Indiana, a herd of bison was successfully reintroduced to the State. Today, they can be seen roaming the meadow in Kankakee Sands, a nature conservancy in the municipality of Morocco in a northwest Indiana prairie.