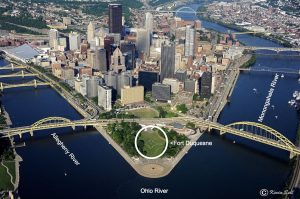 The current location of Pittsburgh, in the heart of the Ohio Valley, leads to what was the Illinois Country. In the 17th century it was essentially a hunting ground for Native Americans.

In the middle of the next century the site was the main cause of the Seven Years’ War (from 1756 to 1763), called the War of the Conquest by the French and the French and Indian War by the British. In 1749, Pierre Joseph Céloron de Blainville, born in Montreal, navigated up the Allegheny from the Ohio River to the Miami River further north, placing lead plates at the junctions of the main tributaries to claim the area for France. In defiance of this action, William Trent established a fur trading post at the “Point” of Pittsburgh for the Ohio Company of Virginia. In 1753, the governor of New France sent 2,000 soldiers under the direction of Claude-Pierre Pécaudy de Contrecœur to build Fort Duquesne on the same spot. On two occasions the British tried to dislodge the French position, but without success. On Wednesday July 3, 1754, George Washington surrendered at the Battle of Great Meadows nearby, his only capitulation.

The beginning of the end

At the Battle of Monongahela, July 9, 1755, Great Britain suffered a most humiliating defeat. General Braddock’s army was almost wiped out, losing nearly 1,000 men with a force of 1,300 soldiers. But on November 26, 1758, in front of the British and American joint armies on the march ten times more numerous, the French abandoned Fort Duquesne under the guise of the night after setting fire to it. The loss of this strategic location (Pittsburgh) was the beginning of the end of New France.

Father Denis Baron, a Récollet priest, was the chaplain of Fort Duquesne from 1754 to 1756 before returning to Montreal. He was responsible for the register of marriages, baptisms and deaths at the fort during this period. According to the register, Jean-Daniel Norment, born September 18, 1754, was the first white child born in Pittsburgh. A total of 33 people were buried in the fort’s cemetery, including Toussaint Boyer, Thomas Jiroux and Pierre Simard. The site of the burial grounds has yet to be found and can remain hidden for several centuries to come.

The first ecclesiastical building in Pittsburgh was a small log chapel erected within the walls of Fort Duquesne. It was christened  “The Assumption of the Blessed Virgin Mary of the Beautiful River”. Today, the catholic church at 45 Sprague Avenue North near downtown Pittsburgh bears the same name to commemorate this rich French heritage of “The City of Bridges”.

Fort Duquesne was named after the seventeenth governor of New France, Ange Duquesne, Marquis de Menneville, born in Toulon, France. He was based in Québec City. François-Marie Marchand de Lignery, a Québec officer in the Marine Troops, was the last commander of Fort Duquesne.