In May 1720, Bienville asked him to explore St. Bernard Bay (now Matagorda Bay) in order to find a site suitable for colonization. For this research Béranger sailed aboard the St. Joseph, a three-masted wooden ship, and his expedition culminated in the discovery of the Aransas Channel (also called the Shrimp Channel by the locals) in proximity of present-day Rockport, Texas.

In his travel notebook Béranger describes with some accuracy St. Joseph Island (now San Jose Island) and Orleans Island (now Mustang Island), Pointe du Chêne (now Oak Point near the current city of Rockport) as well as the language and customs of his Native American hosts. It is said that Béranger buried at the foot of a mature oak tree a lead tablet displaying three fleurs-de-lys to claim the region in the name of the King of France. It has yet to be discovered.

The abandoned men of Orleans Island 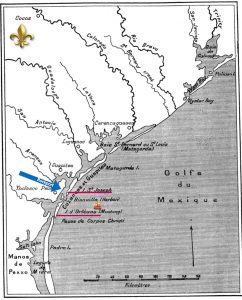 On September 13, 1720, Béranger reportedly asked Mr. de Charleville, a member of the crew, to make a southbound pedestrian reconnaissance along the shore of Orleans Island with some warriors from the Aransas Nation and occasionally light fires on the beach, as trailing signs of their progression.

When leaving the place at the approach of autumn and without news of Charleville, Béranger left behind sergeant Sylvestre and soldier Parisien with mission to find Charleville and the promise to be relieved next spring. Unfortunately for them, Sylvestre and Parisien were left to their fate after the French learned that the southern end of Orleans Island was in the Corpus Christi Channel situated in Spanish protectorate. Nobody knows what happened to the three abandoned men. Even Texas has its secrets of history.