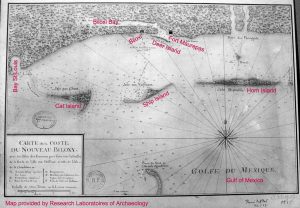 With the wind in sails the French fleet arrived at Ship Island in front of Biloxi Bay on Tuesday February 10, 1699, between Cat (raccoon) Island and Horn Island.

Three days later, following a thorough exploration of the islands, Iberville landed on the mainland to meet the locals. Father Anastasius and 14 crew members accompanied him. On the white sand beach the Native Americans told the French they were “Biloxi”, a word meaning “First Nation” in the Choctaw language. Utility gifts were exchanged during a long and friendly celebration. Biloxi, now a seaside resort in the State of Mississippi, was born from this historic meeting on the beach.

On the eastern shore of Biloxi Bay, sheltered and hidden by Deer Island, Iberville decided to build Fort Maurepas on the site of what is today the city of Ocean Springs, shown on ancient French maps as being old Biloxi. At the time of Colonial Louisiana, Deer Island then named Île aux Chevreuils served as a pantry.

After Mobile (1702-1719), Biloxi became the capital of Colonial French Louisiana from 1720 to 1723 before moving to New Orleans in 1722, while Jean-Baptiste Le Moyne de Bienville was governor. Bienville Island, dedicated to him, was later renamed Horn Island. And, Île aux Vaisseaux became Ship Island.

As early as 1699, Ship Island, home to two sources of drinking water, served as a seaport. It was the main gate to the new colony. In 1721, the governor asked engineers Mr. de la Tour and Mr. Boispenal to design plans for the fortification of Ship Island. Before any ground was broken, masonry done or palisades erected, the proposal to fortify Ship Island became obsolete because the decision was made in Versailles, France, to transfer the seat of government from Biloxi to New Orleans and make Fort de Chartres the main hub of the Illinois Country.

Geography was a determining factor in this decision as it gave New Orleans a major advantage over Biloxi and Mobile. New Orleans, unlike the other two colonies, was on the fluvial route leading directly to the Illinois Country, which became Upper Louisiana, and was close enough to the sea to participate in the Gulf of Mexico’s busy commercial activities.

It is not by chance that 135 years later Fort Massachusetts was built by the United States of America on Ship Island.