On Friday, January 5, 1680, eight canoes crossed the narrow passage of the Illinois River navigating upstream from the present-day town of Peoria with the aim of meeting the Native American Peoria people, a tribe of the Illinois Confederacy, who were camping on both sides of the river’s enlargement forming Lake Pimiteoui, meaning “Fat Lake” in the language of the Peorias, (now Peoria Lake).

With the intent of signalling to their hosts in the surrounding woods that they were approaching in peace, the eight canoes entered the lake side by side, in parallel, with the canoe of Robert Cavelier de La Salle on the right and that of Henri de Tonti on the left. The Native Americans were at first worried before realizing that the white explorers did not want them harm, and welcomed their guests with a feast of bear meat, buffalo fat and vegetable porridge.

La Salle responded to this warm hospitality by offering his hosts axes and tobacco. A peace pipe smoking ceremony followed. The story goes that the bare feet of the father Recollects, Gabriel Ribourde, Zenobie Membré and Louis Hennepin, were rubbed with animal fat to stimulate their tired muscles. The next day, the three priests celebrated mass.

The agreement between the French and the Peorias

The State of Illinois has always been francophone by name because it is the French spelling of the indigenous word “Illinis”, meaning “courageous people”.

Eleven years later, in 1691, another fort was built by Henri de Tonti and his cousin, François Dauphin de la Forest from Paris, France. It is believed that this second fort was erected near the intersection of Mary and Adams streets in downtown Peoria. Although it was named Fort St. Louis II by the French, the local Native Americans chose to call it Fort Pimiteoui. It has been said that the word Pimiteoui also refers to the Native American practice of turning animal fats into a fat for human consumption. While Fort St. Louis II gave birth to the first European colony in Illinois, Fort Crèvecœur was the first non-native structure erected in Illinois. 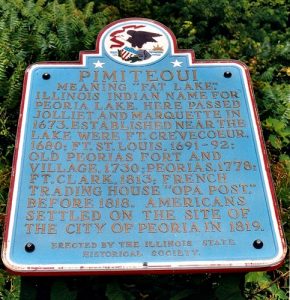 According to historian Judith A. Franke, Jacques Marquette (born in Laon, France) and Louis Jolliet (born in Québec City, Canada) were in 1673 the first whites to stay in Peoria. Citing Father Marquette’s diary, she points out in her book entitled French Peoria that they would have spent several days in the woods with a Native American tribe.