Did you know that it was in Venice on the Gulf of Mexico Coast that (colonial) Louisiana received its name on Thursday April 9, 1682. King Louis XIV of France had asked Robert Cavelier de La Salle to descend the “Great River” to its mouth.

After having entered the “misi-ziibi” (an Algonquin word meaning Great River) near present-day Alton, Illinois, accompanied by twenty-three companions and eighteen Native Americans, La Salle finally arrived in Venice on April 9, 1682. Today, this small community on the riverbank is the last inhabited place along the Mississippi accessible by car. The site is the southern end of Highway 23, called the Great River Road. This terminal feature has earned Venice the nickname “The end of the world”. La Salle buried an engraved copper plate and erected a cross claiming, in an official speech, the territory for France. 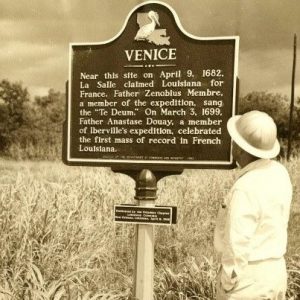 Located 77 miles (124 kilometers) south of New Orleans, Venice is a pretty hamlet where fishing boats outnumber all cars and children together. In 1982 during its 300 Anniversary, an commemorative tablet was erected by the then government of Louisiana State to solemnly mark the official beginning of Colonial French Louisiana.

At the time of La Salle, the local Native Americans strongly believed that the area at the mouth of the Mississippi was full of evil spirits. According to hearsay, they observed islands of various sizes moving or disappearing in front of them. They also saw fiery balls of marsh gas coming out of the ground. And, they felt with fear the trembling earth of the river delta in perpetual change.

Although the zone has discouraged the establishment of Native American villages, indigenous people came from afar to fish, just as modern-day tourists do on a regular basis. It has been reported in historic records that although La Salle and his group noted very few Native Americans below New Orleans, they certainly saw several signs of their presence.