On the west bank of the Red River of the South in northwestern Louisiana (as opposed to the Red River forming most of the border of Minnesota and North Dakota, see Grand Forks), the city of Natchitoches is crossed by the Cane River Lake, which is a long oxbow lake formed from a portion of the Red River. This historic city is the oldest permanent settlement in the Louisiana Purchase. Its founding in 1714 preceded that of New Orleans by four years. Its startup prosperity was largely due to its founder, a French-Canadian officer who was a true friend of the Natchitoches, one of the three Native American tribes of the Caddo confederacy living along the Red River. Here’s how this French settlement on American soil was born out of a trading post named Fort St. Jean Baptiste des Natchitoches, the location of which was no coincidence.

In 1714, the Canadian officer Louis Juchereau de St. Denis, who had a good knowledge of the territories west of the Mississippi River, was put in charge of opening a trade route to connect with the Spanish colonies. At the time, the Natchitoches inhabited an enlargement of the Red River studded with islands and bayous. St. Denis asked them if they would kindly construct two buildings to store his goods and merchandise. They did, in kindness to him. Then St. Denis left safely a number of soldiers there to trade and live among them. It is from this kind act of friendship and fraternity that the settlement of Natchitoches was born.

A privileged and protected location

Two years later, Fort St. Jean Baptiste was erected on a nearby island with a view to ensuring the protection of the western frontier of Colonial French Louisiana. This didn’t hamper by any means the soldiers of the fort to establish friendly and profitable trade relations with the Spanish. The location of Fort St. Jean Baptiste was both privileged and protected. As a privilege, the land was capable of producing abundant crops and vegetation. As a protection, navigation was impossible upriver. Here’s the needed clarification.

Just north of the settlement, the Red River was impacted by a gigantic natural log jam, known as “The Great Raft”, extending more than 124 miles (200 kilometers) upstream and clogging the river. Periodic flooding dislodged great number of trees from the river’s flood banks that was made up of easily erodible soil. Each spring brought a fresh supply of logs and the raft grew stretching the intermittent jam over a great distance. This almost impenetrable mass of trees and trunks acted as a palisade protecting the Caddo people and the inhabitants of the fort. Since then the course of the Red River has changed a lot. Of course, the original Fort St. Jean Baptiste is long gone but it was reconstructed in 1979 on the western bank of the Cane River Lake in the vicinity of where it is believed to have been located, just south of historic downtown Natchitoches. 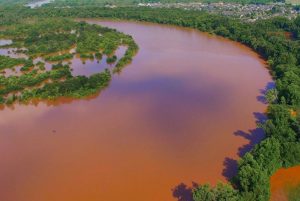