Along the Great Lakes

Fort St. Joseph (1691 – 1781) was erected on the site on an old Jesuit mission established in the 1680s. It became one of the first European settlements in the western part of the Great Lakes.

Towards the end of the 17th century the fort served as a trading post as well as a military base. It housed a commander, twenty soldiers, a blacksmith, a chaplain, a carpenter, an interpreter, and about fifteen households. Documentary sources indicate that inside the palisades were the officers’ house, barracks, the chapel, a military warehouse and buildings for storing merchandise and furs. It is estimated that from about 1753 many families and new comers started to build their residence outside the palisades. The fort was bustling because it was strategically located at the crossroads of the St. Joseph River and the busy Great Sauk Trail that connected the Detroit River to Rock Island on the Mississippi River.

The resident blacksmith was immersed in producing iron tools, hinges, crampons, nails and other structural elements necessary to maintain a self-sustained community. He was also occupied making goods wanted by Native Americans such as awls, scissors and hooks. The only other option was to wait for the iron products to arrive from Quebec City. The Quebec City – St. Joseph one way trip was in good time a 75-day navigation by canoe, with a few rapids on route, making local production of custom made metal objects absolutely necessary.

The Fort St. Joseph Archaeological Project is a joint initiative of the City of Niles, Michigan and Western Michigan University for the excavation, interpretation and preservation of Fort St. Joseph’s rich French heritage. Here are some artifacts unearthed from the fort’s historic site on the shores of the pleasant St. Joseph River. 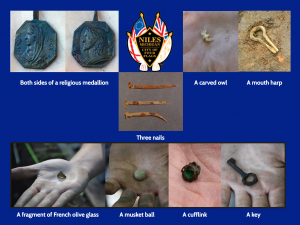