At the request of Pierre-François-Xavier de Charlevoix, a French Jesuit priest, the King of France gave his approval to the establishment of an outpost among the Sioux. The expedition of René Boucher, Sieur de La Perrière (a francophone from Canada) left Montreal in a flotilla of birchbark canoes on June 16, 1727. Fathers Michel Guignas and Nicolas de Gonnor were part of the traveling group.

They arrived at the actual site of Frontenac, Minnesota, on September 17, just a few miles southeast of the current twin cities of Minneapolis / Saint Paul. The purpose of the expedition was to fraternize with the Sioux tribes, including the Itazipacola, Sicangu and Oohenupa people. The French were the first white men to meet the Sioux in the years 1670-1680. A fort named after Charles de Beauharnois, Governor of New France, and a chapel dedicated to Saint Michael the Archangel were erected during the autumn on the modern-day location of the Ursuline convent called Villa Maria in Frontenac.

Pepin Lake, on the shores of which Fort Beauharnois and Minnesota’s first Catholic Church were built, is a natural widening of the Mississippi River on the border between Minnesota and Wisconsin. It is said that King Louis XIII granted the brothers Pépin, namely Étienne and Guillaume, lands along the upper course of the mighty Mississippi. Two of Guillaume’s sons, Jean and Pierre, later explored the area and carried on business with the Sioux around the lake. Their last name was given to this wonderful body of water. 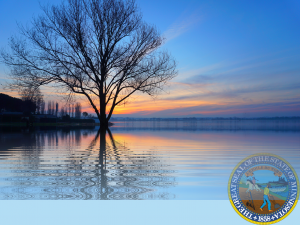 “L’Étoile du Nord”, French for “Star of the North”, is today the official motto of Minnesota. It was selected in 1861, shortly after Minnesota achieved statehood. The motto also appears on the State’s flag and great seal, and one of Minnesota’s well known nicknames is “The North Star State.” Minnesota is a Sioux name meaning “water that reflects the sky”. The name is expressive and elegant.