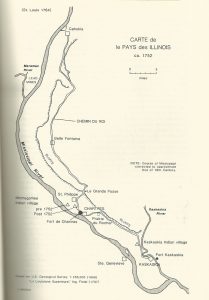 From 1680 to 1717 the Illinois Country (the Upper Mississippi Basin) was part of Canada.

In 1717, the Illinois Country became Upper Louisiana having its administrative office at Fort de Chartres situated between Kaskaskia and Cahokia along the King’s Road on the east side of the Mississippi. This huge part of New France is today the Midwest of the United States of America.

When the war broke out between France and England in the 1750s, the French made three important strategic additions to their otherwise tenuous presence. They made Fort de Chartres a stone fortress in 1752-56, and they built Fort Duquesne (now Pittsburgh) at the source of the Ohio River in 1754 and Fort Massiac at its mouth in 1757 to control “La belle rivière” (the Ohio River).

After the conquest in 1763, francophone settlers gradually left the eastern banks of the Mississippi to resettle on its western shores, including New Orleans (founded in 1718), St. Geneviève (1735), and St. Louis (1764).

Nowadays every year, thousands of Franco Americans and francophile Americans passionate about the history of the Midwest proudly celebrate their French heritage through historical re-enactments and “French-style” rendez-vous showing their “joie de vivre”.