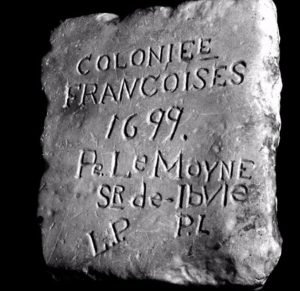 The “Iberville Stone” is one of the oldest colonial relics of Colonial French Louisiana.

This historic stone from early American history was recovered from the site of Fort Maurepas, now the city of Ocean Springs, Mississippi, the first permanent settlement established by the French on the Gulf of Mexico. This white marble plaque is believed to be the marker that French Canadian explorer Pierre Le Moyne d’Iberville used in 1699 to formally take possession of the Louisiana colony on behalf of France. It can be seen on display at The Cabildo of the Louisiana State Museum in New Orleans. Testing has revealed it is made of a marble that is generally found in France and was used as ballast in French ships.