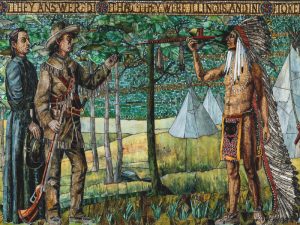 In Chicago in 1673 (then called Chicagou) the Grand Chief of the confederacy responded to Louis Jolliet in the Algonquian language that his people were Illinois.

The Chief gave his guests a peace pipe as a safeguard on the vast territory of the Illinois Confederacy, which included a dozen nations including the Miami, the Kaskaskia and the Cahokia, among several others. Jolliet, an explorer born in Québec City, carried the pipe throughout his voyage as a figurehead.

Protected by, and allied to the French during the War of the Conquest, the Illinois were, after the fall of New France in 1763, almost annihilated by the British (and later by the American government). Although they did ask for the help of the French, the fall of the French Monarchy in 1792 left them definitively to their own fate. Nowadays, they are mostly found in the actual State of Oklahoma.

The Native American chiefs knew the intent of the French was not conquest but commerce under the fraternity banner. Smoking the peace pipe and being surrounded together within its smoke was a symbol of sharing and wanting to do things in common.